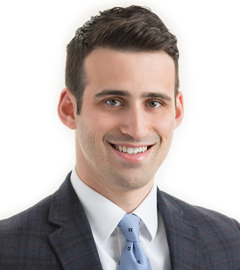 His role includes the development and execution of strategic initiatives to cultivate new business, geographic expansion, as well as facilitating cross-selling opportunities across MorganFranklin’s service portfolio and the Vaco family of brands.

Over more than 12 years with MorganFranklin, Andrew has held roles of increasing responsibility, including prior roles in client service where he managed a number of large-scale projects for MorganFranklin clients.

Viewed as a go-to industry connector and thought leader, he organizes one of the largest networking dinner series in the United States for finance and business leaders and has authored content for Forbes, The Huffington Post, and other publications featuring insights from his interviews with business, sports, and media personalities.

Andrew has served as an adjunct professor of marketing at George Mason University and regularly speaks to young professionals on topics such as leadership, networking, and career development.

In 2013, Andrew became the youngest alumni ever to win the Alumni Volunteer of the Year Award—awarded once per year by the Penn State Alumni Association, the world’s largest dues paying alumni association. In 2011, he co-founded Penn State’s Smeal College of Business Networking Association for the Washington DC Metro Area and grew it to one of the largest, most active Penn State alumni networking affinity groups in the country. In 2007, he co-founded Autism Speaks U, a national initiative of Autism Speaks that has since engaged students from universities and colleges across more than 25 states in advocacy, awareness, and fundraising.

Andrew earned his B.S. in accounting from Penn State University with a minor in labor and industrial relations and a master’s degree from Seton Hall University. He is also a licensed certified public accountant.